ARTICLE AND PHOTOS BY LIANE CHAN

JUNE 3 | POMONA—The Long Blondes played an exceptionally good show tonight at the Glass House in Pomona, a long way from their hometown of Sheffield, England. Not only are they excellent performers and songwriters, but they are also very stylish in their striped shirts, short shorts and high heels. Frontwoman Kate Jackson proved to be an entertaining and talented singer, captivating the audience for their 16-song set, which consisted of tracks from their two full-length albums, Someone to Drive You Home (2006) and the recently released Couples (2008). Dorian Cox and Emma Chaplin switched between guitar, keyboards and backing vocals with the greatest of ease, while Reenie Hollis (bass, backing vocals) and Screech Louder (drums) provided a solid rhythm section.

Musically, The Long Blondes are a distinctive and interesting mix of New Wave keyboards, pop punk guitars and powerful, playful vocals. Lyrically, they are comparable to Morrissey and fellow Sheffieldian Jarvis Cocker, as the band writes unusually descriptive song titles such as “Here Comes the Serious Bit,” reminiscent of Kim Wilde’s “Kids in America,” and “Too Clever By Half,” which gradually builds on Jackson’s higher-pitched vocal range. The Pulp connection is fairly significant since The Long Blondes’ debut album was produced by Pulp bassist Steve Mackey. Some of the highlights of tonight’s show included current single “Century,” which, unlike many of the band’s other songs, seems to rely more on Jackson’s ability to hold a note rather than her witty lyrics and standard warbly vocal delivery.

“Separated By Motorways” is more typical of The Long Blondes sound, with its staccato drum beat, rolling and angular guitars and bouncy chorus. “You Could Have Both” features spoken-word lyrics by both Jackson and Cox in the middle of the song, which provides an interesting break from the band’s usual sound. When performing “Couples,” a song about being in a relationship versus being alone, the band dedicated the song to a couple who ran a local bookstore down the street from the venue. At one point, some fans in the front row started singing the song “Once and Never Again,” which the band later played toward the end of the set. The song itself sounds like it would be suitable as the theme song for an ’80s sitcom. 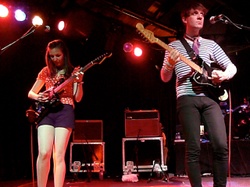 Another favorite was “I’m Going to Hell,” a keyboard-heavy track with clever rhyming lyrics. “Giddy Stratospheres” is one of the band’s more recognizable songs, and it was a fun way to end the first part of their set. With the energy level high, the encore was well-deserved by both the band and audience. For the encore, the band performed “Lust in the Movies,” a song that name checks Edie Sedgwick and other actresses, with backing vocalists Chaplin and Hollis taking a larger role during the chorus. The Long Blondes then ended with “Guilt,” a Blondie-esque track with distinctive keyboards and a seemingly familiar chorus. Though the venue seemed far from packed, the fans here tonight were rewarded for their devotion, as the band performed a full and entertaining set.

Openers Cavil at Rest provided a great indie rock sound to begin the show, with two guitarists, a bassist, a keyboard player and drummer, most of whom were singing in a very nice harmony for a few songs. Great Glass Elevator was next, with an interesting stage setup of a white door, DVD player and projector with what looked like homemade animation projects. They had a lively frontman, who often interacted with the audience. Free Moral Agents was the last opening band, and they slowed things down with an unusual mix of dual KORG keyboards blended with standard bass, guitar and drum sounds, along with a female singer. However, this combination failed to work when performed live.

Overall, however, the opening bands did a good job of warming up the audience for The Long Blondes, who really are a talented group of musicians with a glamorous and fun stage presence. Their lyrical and musical mastery is a combination that is sadly rarer than it should be. The Long Blondes’ talent truly is their ability to craft memorable and fun songs that keep an audience dancing and singing along. I left this show thoroughly impressed by their performance as well as their sense of style.

For more photos of The Long Blondes, view The Scenestar’s photo gallery.