MAY 28 | HOLLYWOOD— A true indie rock show is just what you’d expect from Mates of State. Husband-wife duo Kori Gardner (vocals, keyboards, piano) and Jason Hammel (vocals, drums) brought their signature vocal harmonies, bouncy keyboard and piano riffs and rocking drums tonight, mixing it with a mini-string section of violin and viola, and even adding in a trombone. They played a mix of new songs from recently released fifth album Re-Arrange Us as well as a number of older favorites to delight fans.

To introduce some of the newer material, Mates of State performed Re-Arrange Us track “Now,” a fun number to sing along to, with alternating vocals by Gardner and Hammel showing off their harmonic stylings. Another new one, “Get Better” is a piano song that mixes in the couple’s mini-string section, but it was more upbeat than orchestra-oriented, though it ended in a classical style. Mates of State also delved into Bring It Back, the band’s first Barsuk-released album, by performing fun and bouncy “Fraud in the ’80s,” which offered plenty of interesting keyboard fills. 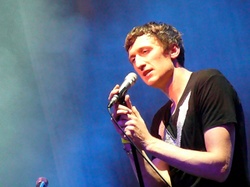 They went even further back in their catalog with “Goods,” from their 2004 All Day EP. One of their better-known songs, “Goods” builds from the vocal harmonies of Gardner and Hammel while maintaining a steady beat and frenetic-sounding keyboards. Just as classic was Team Boo track “Fluke,” which Mates of State made especially interesting by changing beats at various parts of the song and including a memorably fast keyboard riff.

The crowd received the new material, which was more piano-based, as excitedly as they responded to the older tracks, which uses more synthesizers. Gardner’s piano skills were a real highlight of the show, as she easily transitioned between keyboards and piano, occasionally even playing both at the same time. Behind the band, there were projections of various images, which gave the performance a cinematic and theatrical feel.

Opening band Biirdie was reminiscent of Bright Eyes, though more playful and adding a bit of piano and keyboards. Their music ranged from poppy indie rock to alt-country, as members switched between keyboards, guitar and bass. It was a spirited and lively performance that properly excited the crowd for the headlining event. Overall, the night was a thrill. Mates of State offers a fun, enjoyable time with their piano-laden pop melodies and impressive dual-harmonies, properly re-arranging the audience, like they promised, into a happy mess of contentment.