Though we didn’t attend all the panels we wanted to for one reason or another, we did actually get to a lot and overall had a great time despite not staying for the last day.  The Toonami panel actually got us hyped up for FLCL2, which ended up disappointing over half the people waiting in line for it for over an hour (maybe 2).

Apparently, we should have waited in line for the Production IG panel right before it since they ended up letting most of the people who attended stay there instead of the people waiting in line for it. This is the kind of bad stuff I’ve heard happens at Comic Con, but I guess Anime Expo is not immune.

The Toonami people also gave out a bunch of free T-shirts before it started, which is always nice. One exciting announcement they made at the Toonami panel was about the broadcast premiere of One-Punch Man, a series about a guy so strong he can take anyone (or thing) out in one punch. I remember it from the Viz Panel last year and just got this press release about it:

Contents hide
1 VIZ MEDIA ANNOUNCES THE BROADCAST PREMIERE OF ONE-PUNCH MAN ANIME SERIES ON ADULT SWIM
1.1 Action Anime Series About A Superhero With A Knockout Punch, Based On Smash Hit Manga Title, Premieres On North American TV Later This Month!! San Francisco, CA, July 5, 2016 – VIZ Media, LLC (VIZ Media), a premier company in the fields of publishing, animation distribution, and global entertainment licensing, has announced the North American broadcast debut of ONE-PUNCH MAN on Adult Swim’s Toonami. VIZ Media and Adult Swim’s Toonami team made the announcement before a packed audience of fans at the nation’s largest anime convention – Anime Expo – held this past weekend in Los Angeles.
2 Share this:
3 Like this:

Action Anime Series About A Superhero With A Knockout Punch, Based On Smash Hit Manga Title, Premieres On North American TV Later This Month!! San Francisco, CA, July 5, 2016 – VIZ Media, LLC (VIZ Media), a premier company in the fields of publishing, animation distribution, and global entertainment licensing, has announced the North American broadcast debut of ONE-PUNCH MAN on Adult Swim’s Toonami. VIZ Media and Adult Swim’s Toonami team made the announcement before a packed audience of fans at the nation’s largest anime convention – Anime Expo – held this past weekend in Los Angeles. 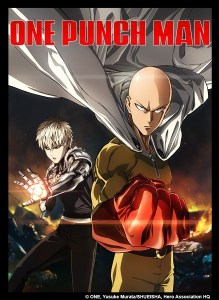 The action adventure about an uncanny superhero with a knockout punch is scheduled to premiere on July 16th (time to be announced), with future episodes set to air each Saturday. Toonami is the anime programming block on Adult Swim, Turner’s network offering original and acquired animated and live-action series for young adults.

“One-Punch Man is a one of a kind show and we’re excited to have it join our Toonami line-up,” said Jason DeMarco, senior vice president and creative director, on-air for Adult Swim. “We know our viewers have been hoping this would happen for a while, and we’re thrilled to have been able to make it happen!”

ONE-PUNCH MAN is based on the bestselling manga series (the latest chapters serialized in Weekly Shonen Jump, and graphic novels published by VIZ Media; rated ‘T for Teens), created by writer ONE and artist Yusuke Murata. The anime series was animated by the renowned Japanese studio, Madhouse, and helmed by famed anime director, Shingo Natsume, (Space Dandy, Fullmetal Alchemist: The Sacred Star of Milos), and features character designs by Chikashi Kubota (From the New World, Robotics:notes). For its broadcast premiere on Toonami, ONE-PUNCH MAN will feature a notable cast of English voice actors including Max Mittelman (as Saitama), Zach Aguilar (as Genos), Robbie Daymond (as Mumen Rider) and Erik Kimerer (as Speed-o’-Sound Sonic).

“With its compelling characters, high-energy animation and contemporary spin on the classic superhero premise, ONE-PUNCH MAN is a bombastic action tale unlike any anime series that has come before,” says Charlene Ingram, Senior Marketing Manager, Animation. “Don’t miss the premiere on Adult Swim later this month!”

In ONE-PUNCH MAN, Saitama only became a hero for fun, but after three years of “special” training, he finds that he can beat even the mightiest opponents with a single punch. Though he faces new enemies every day, it turns out being devastatingly powerful is actually kind of a bore. Can a hero be too strong?

VIZ Media is the official North American distributor of the ONE-PUNCH MAN anime and manga properties and holds the digital and print publishing rights as well as broadcast rights, digital streaming rights, home video rights and master merchandising rights to the series.

For additional information on ONE-PUNCH MAN and other anime and manga titles distributed and published by VIZ Media, please visit www.VIZ.com.

On Day 2 of Anime Expo, we focused on getting into the Lab Zero Panel for Indivisible and Skullgirls. That wasn’t too bad, though it was hot outside and there’s not much we could do about that. The had a tent out for the lines for the largest room, but not the 2nd largest one. It was an interesting panel, their fundraising for Indivisible was actually not as successful as the one for Skullgirls – but at least they still reached their funding goal. There was some technical demos on Indivisible, but also an announcement for a mobile version of Skullgirls. Fighting games on mobile are not an easy thing to do, so I hope it turns out well.

We also stopped in the video rooms at the JW Marriott at one point and Final Fantasy XV was on. It’s a nice place to relax and enjoy some free cold water.  Someone asked me about it for a survey as I was headed to the bathroom. I enjoyed it, though I think we only saw about half of one episode and one full one. Not sure how long it will be, but it will be out next year with the next game. For some reason, the 2nd day was especially tiring. Probably all that waiting outside in the sun, I think we were too tired to even get dinner.

We made up for it on the last day visiting the Okamoto Kitchen food truck, which was where we went after the Funimation panel. I think the big news at Funimation was that you could sign up for a trial of their streaming service and get a free shirt, though I decided to just sign up for free sunglasses. They talked a lot about their simulcast of various series, which were too many to remember!  They definitely have all that info on their website, which they mentioned recently got a facelift.

Andrew started talking to someone at the Okamoto Kitchen food truck and at first I didn’t know who it was, but I recognized the voice soon after they were talking for awhile. It was James Chen, a well known commentator in the Fighting Game Community, who I’m used to seeing with a mustache (apparently why I didn’t recognize him). He explained that the owner of the food truck was a really good Virtua Fighter player in his past and even competed in Japan. That’s pretty serious! Anyways, the food is seriously good too. We’d gotten it before at the Japan LA food art event, where I picked up more Tokidoki (something I also did right before Anime Expo at my local Hot Topic). I probably should have posted some photos on Instagram, but I got some better photos with my actual camera using Food Mode. Behold the glorious Okamoto Style Fried Chicken!  Definitely better than Convention Center food and worth the slightly higher cost.

Aside from panels, food, and video rooms, the Expo Hall was busy and they expanded Artist Alley to the downstairs hall, which is more like a parking garage. They had tabletop games there last year, but it seemed too full of people and lacking ventilation. I heard there was some people who had heat exhaustion and dehydration there, no surprise considering how stuffy it felt just walking through a few times. We spent a lot of time at Lab Zero’s booth since Andrew loves talking to them. I think they’ve gotten used to him and are pretty friendly to him. We got some photos with their Indivisible cardboard cutout of the main character Ajna.

I took a lot of photos over the 3 days we went and they are all on Flickr and Facebook, but photos always look a lot better on Flickr for some reason. I think Facebook does some weird compression to images that ends up ruining them, but maybe I’m just biased as a longtime Flickr user. I did get a lot of good photos outside the panels, since the camera I brought is better at close up shots and night photography. As always, there’s plenty of great cosplay including some riding Metro! Actually, staying at hotel right near a Metro station was a great idea and a lot faster than taking the shuttles. Of course, I’m a little biased there too.